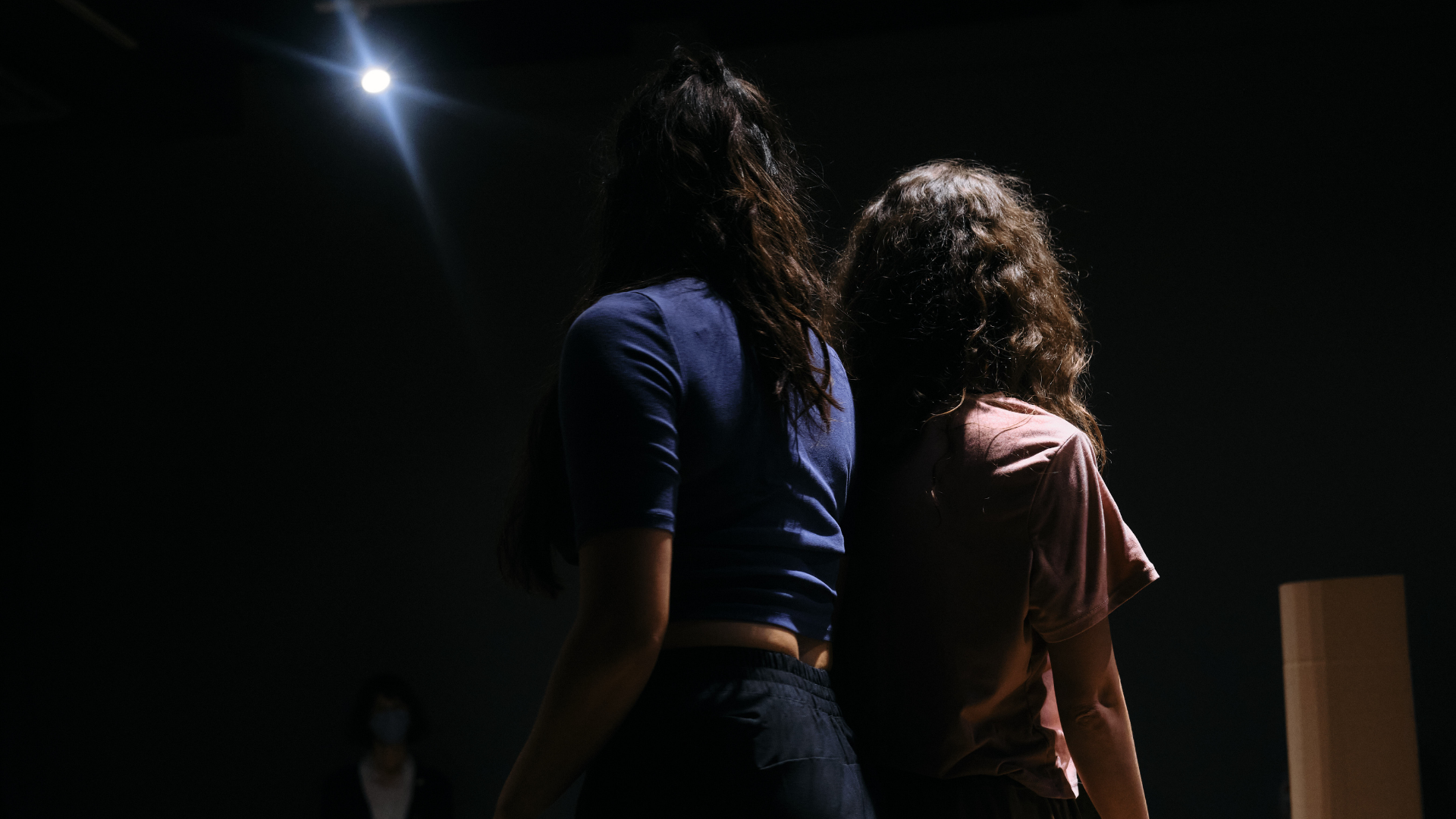 Artistic Director of Jasad Dance Projects, Meryem Alaoui is a dancer-choreographer from Morocco, living in Toronto. Her work is often an invitation towards a softer and sensorial experience of dance. Through her work at Jasad, she aims to increase the visibility of North African/Arab/Middle Eastern contemporary dance artists in Canada and internationally. A graduate of the School of TDT, she has danced for multiple choreographers in Toronto, including Amanda Acorn, Peggy Baker, Anthony Hamilton and Karen Kaeja. Her choreographic works have been shown in Ontario and Quebec. Meryem has received residency support nationally and internationally, and funding from the CCA, the OAC and the TAC. She also enjoys breaking the silos between professional and community art, by being involved in arts-education and community arts projects.

Sasha Amaya studied at the Royal Winnipeg Ballet School and the School of Contemporary Dancers before obtaining her BA in Philosophy, Literature, and the History of Ideas from the University of Winnipeg. Going on to graduate studies at the University of Cambridge and the Royal Institute of Art Stockholm, and dance studies in Germany and France, Sasha works in dance, choreography, installation, and direction. In her practice, Sasha is particularly interested in how we frame, utilize, reject, and repurpose historical narratives and techniques in contemporary art, how we think about and define craft, and the relationship between space, sound, and movement. As a collaborator, Sasha finds great pleasure in the adventure that is creating shared vocabularies and building up new worlds with others www.sasha-amaya.com.

During their residency, Meryem Alaoui and Sasha Amaya are interested in the concept of incompletion in relation to the environment and the body, specifically with forms of materiality and objects alongside the moving body. An image that was initially presented as a point of departure is that of the Hassan Tower, a never-completed Mosque in Rabat, Morocco. Drawn to the unusual power and beauty of the tower’s uncompleted state, Meryem and Sasha are interested in exploring this state of incompletion in their bodies, through movement, touch, and voice.

The artists’ interest also lies in how our somatic bodies hold knowledge and how our past experiences affect our way of creating now, in dance, but also in daily life. Meryem and Sasha are curious about how they can dialogue through movement, as they research and create together, in an effort to encourage a human meeting beyond the mere presence of two opinions, perspectives, and cultures brought side by side. 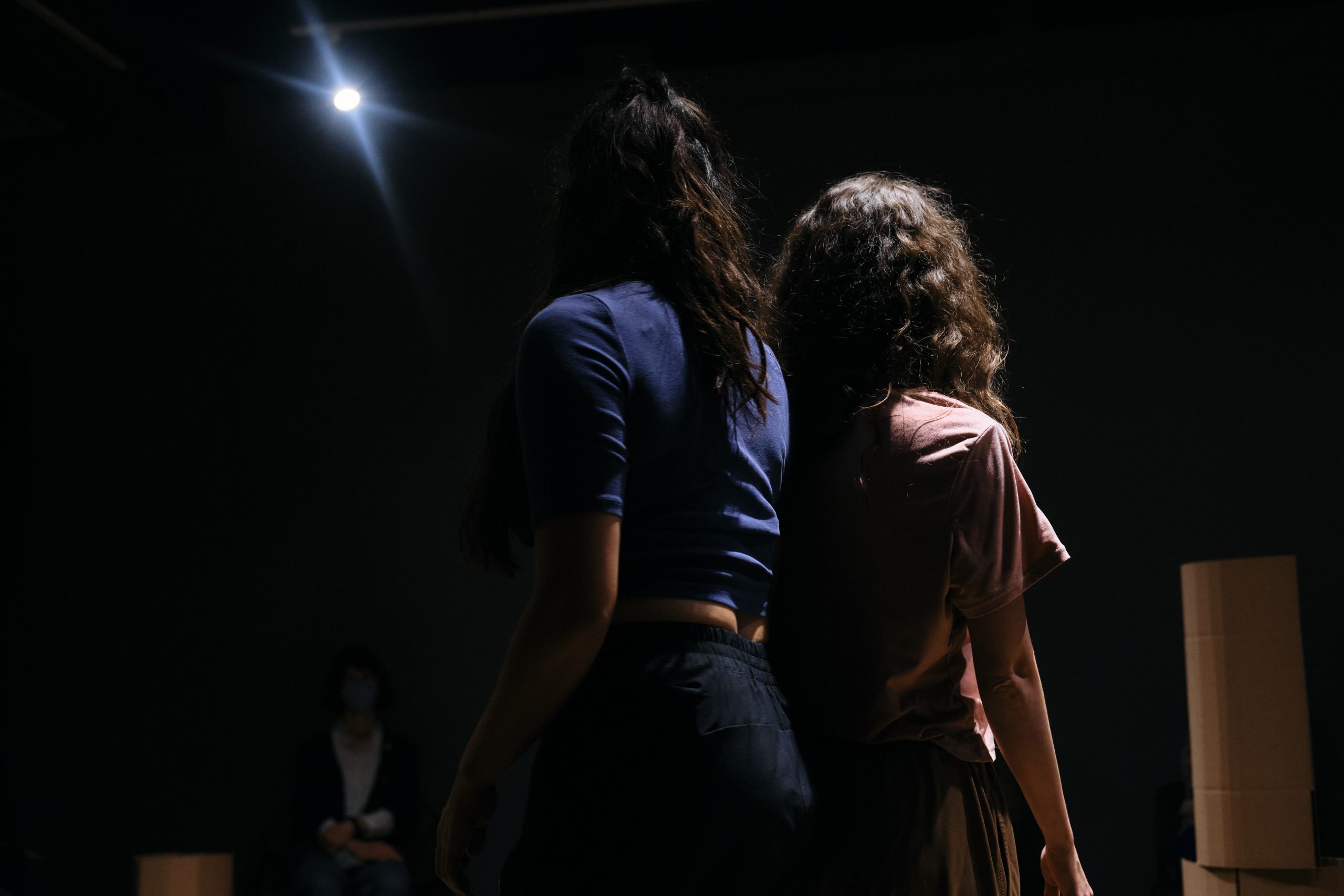 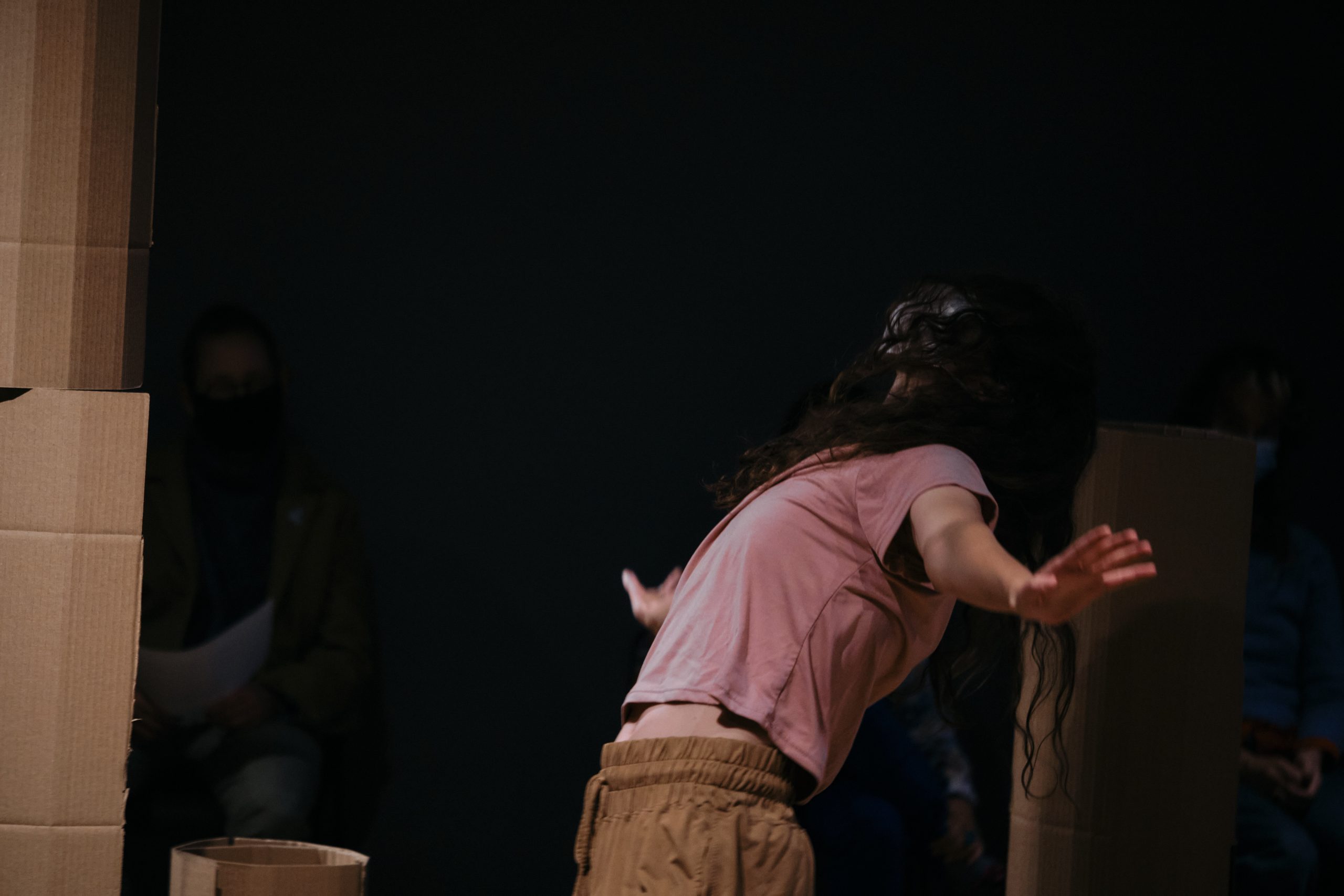 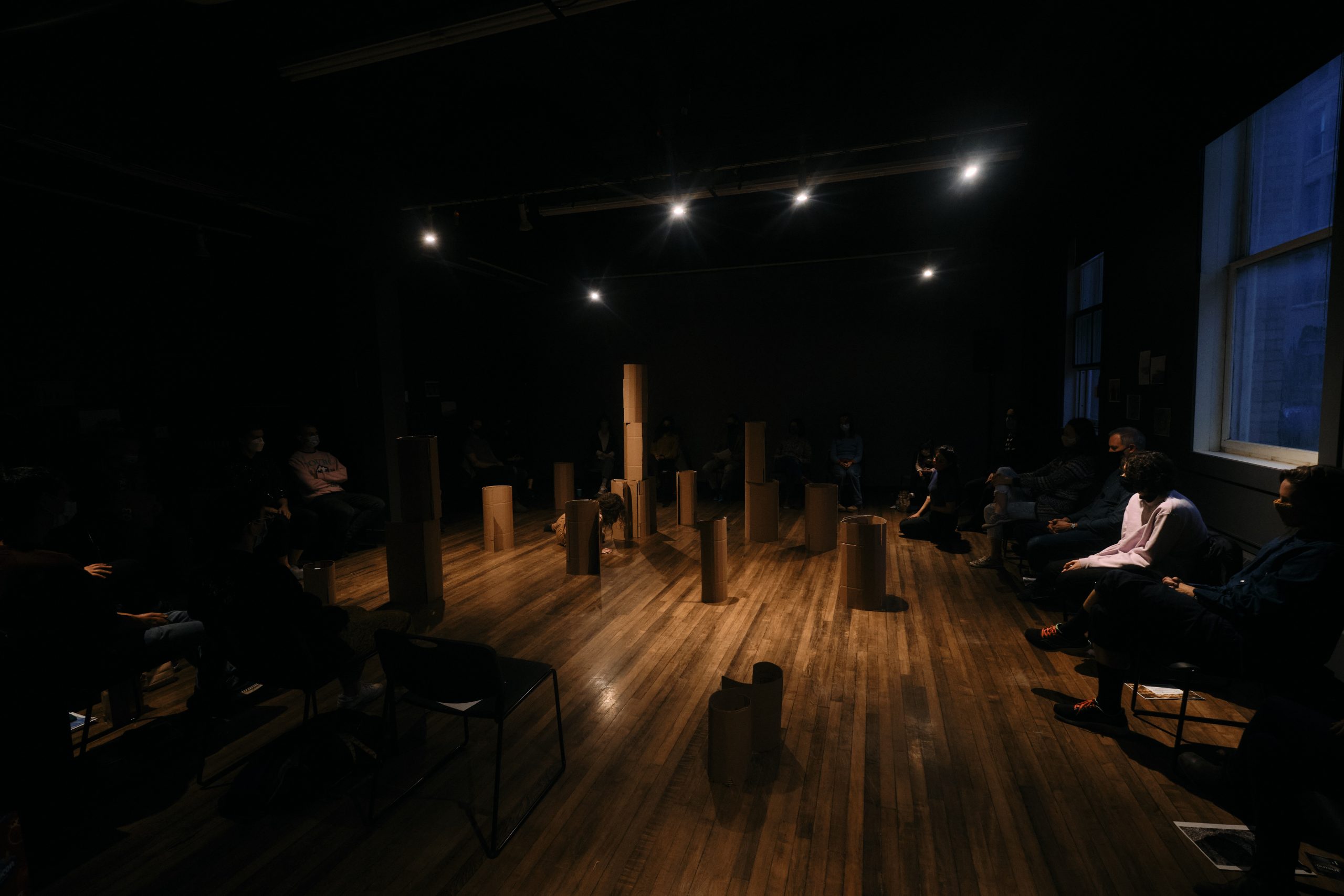 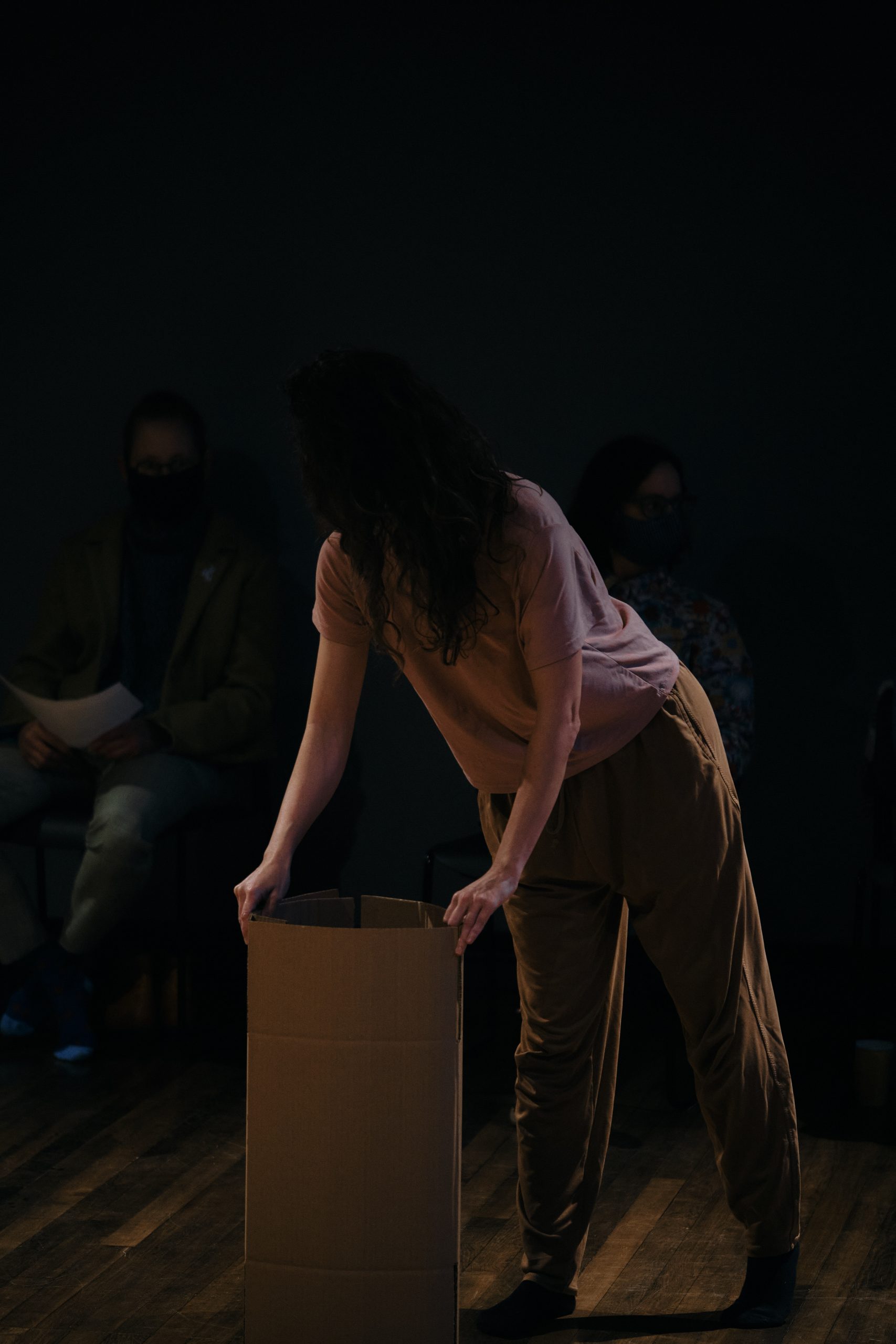 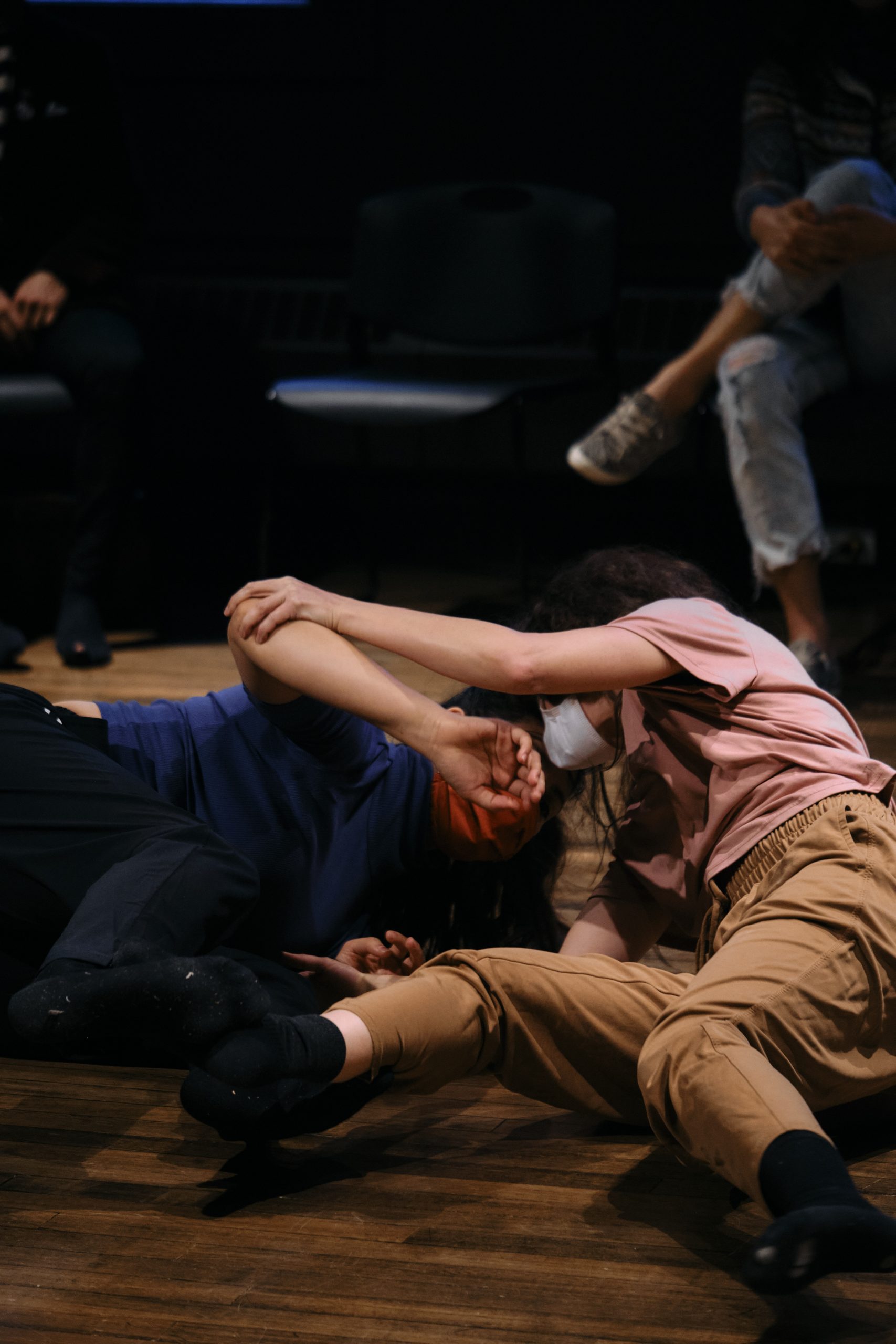 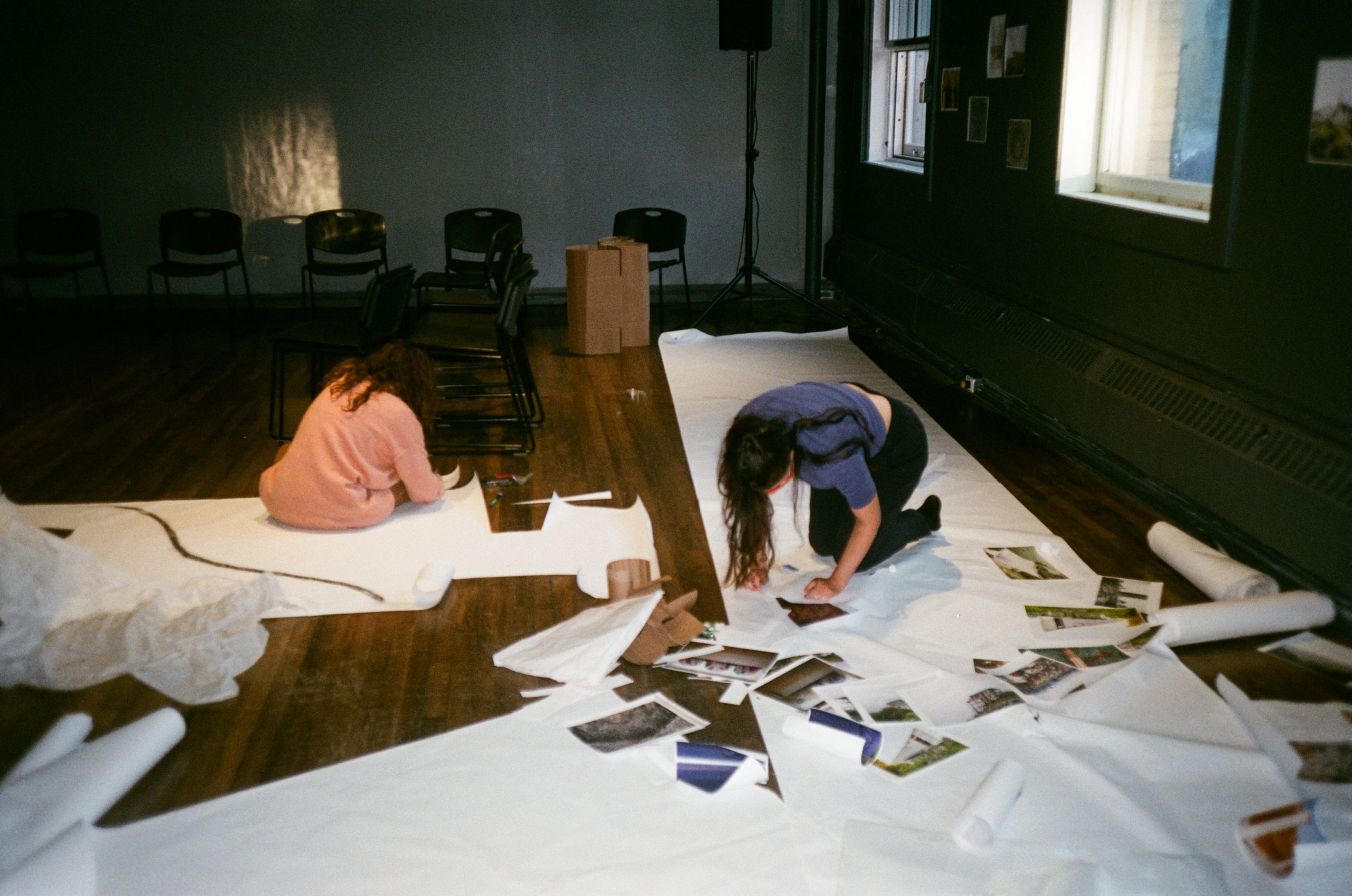 Research Series Presentation with artists Meryem Alaoui and Sasha Amaya, October 2021
Photos by: Calvin Lee Joseph
Images left to right, top to bottom:
ID: Meryem and Sasha stand backs to the camera, bodies touching with a bright light coming from the back.
ID: Meryem in a high release, arms outstretched to the sides, hair covering her face.
ID: The performance space is lit up with lots of cylinders made of cardboard, some quite tall, audience is surrounding the space, sitting, very dimly lit.
ID: Meryem places a cylinder made of cardboard in the performance space, her hair is covering her face.
ID: Meryem and Sasha performing choreographic research, their bodies are on the ground, Meryem touching Sasha’s arm, both of them in motion.
ID: Meryem and Sasha prepare for their Research Series Presentation, they are on the floor with large scrolls of paper and lots of images scattered around them.